In 2009, Chinese entrepreneur Jack Ma single-handedly created the Singles Day sale by converting a fabricated holiday celebrated among lonely college students into what has become the biggest revenue-generator the world has ever known. By copyrighting the phrase “Double 11”—a play on November 11—and aggressively courting merchants, Ma’s gargantuan ecommerce company Alibaba manages to stay ahead of the competition and sell more merchandise in a 24-hour period than Black Friday and Cyber Monday combined.

Today, Alibaba controls around 80 percent of China’s ecommerce market and is giving global retail giants like Amazon a run for their money. To keep up with the stiff competition, Walmart plans to spend $2 billion over the next two years to improve its own ecommerce infrastructure.

When explaining the significance of Alibaba and Singles Day, I’m prone to pull out every synonym for “big” and “huge” I can think of. So instead, I’ll let the numbers speak for themselves. Below are 11 such numbers that help tell the story of Singles Day, the holiday that Jack Ma built .

11.11
The date Chinese university students selected back in the mid-1990s as a sort of anti-Valentine’s Day for single people. What started as a joke has become the world’s largest shopping holiday.

$1 Billion
How much merchandise Alibaba sold last Singles Day within the first three minutes of the sale. 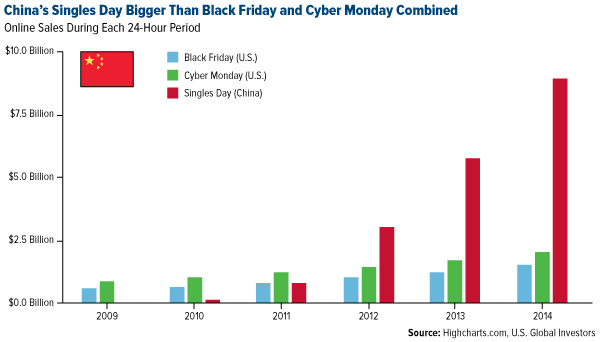 $12 Billion
What many analysts predict Alibaba will generate this Singles Day.

43 Percent
The percentage of Singles Day transactions made on mobile devices in 2014. Expect to see this number rise after the sales figures roll in this year.

40,000
The number of merchants that will be participating this year, including global brands Disney, Apple, Costco, Macy’s and Lego.

6 Million
The number of items to choose from.

$277
The average amount each shopper is expected to spend.

760 Million
The number of packages China’s postal service estimates will be needed to ship Singles Day orders. This is up 40 percent from the 540 million used last year.

1.7 Million
The estimated number of deliverymen and women that will be needed.

200
The estimated number of jets and airplanes that will be deployed to handle the sales volume in China alone.