This shouldn’t surprise anyone, but public trust in the federal government is eroding. Sixty years ago, 75 percent of Americans expressed faith in the government to do the right thing “most of the time” or “just about always.” Seventy-five percent! You can’t get 75 percent of people to agree on anything now, as the recent “Laurel or Yanny” video proved.

Today, only one in five Americans, or 20 percent—a near-record low—believes our leaders make decisions in the country’s best interest. If you’re reading this, you might very well be in the camp that has some serious doubts. 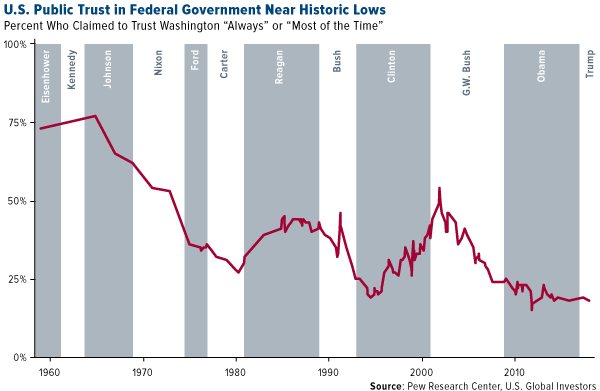 The polling data, provided by the Pew Research Center, was shared by Pulitzer Prize-winning biographer Jon Meacham, who spoke last week at an Investment Company Institute (ICI) meeting in Washington, D.C. Although no fan of the president, Meacham believes, as I do, that fed up, disillusioned voters turned to Donald Trump to take on the beltway party and career bureaucrats and roll back out-of-control regulations.


This anti-establishment discussion isn’t just happening here in the U.S., of course. Brexit in the U.K. was a populist backlash against excessive rules from unelected bureaucrats in Brussels. Last year, France nearly elected the far-right Marine Le Pen to the president’s mansion. And in Italy this week, tax-paying middle class, euroskeptic voices are getting louder following President Sergio Mattarella’s veto of their pick for economy minister.

Love him or hate him, Trump has so far stuck to his word, and he doesn’t seem to have any reservations about whose applecart he upsets. He’s an equal-opportunity disruptor, and for that he has opponents on all sides of the political spectrum, including the beltway.

It's little wonder, then, that “Trump” is likely the most spoken word in the English language right now, according to Meacham. Just don’t tell Trump that.

The presidential historian—who last month delivered the eulogy for former first lady Barbara Bush—also reminded the audience that, as bad as many people believe things are right now, they used to be much worse. Remember slavery? Remember Jim Crow?

Some people believe Trump is determined to weaken First Amendment protections, but he’s not the biggest threat to free speech this country has ever seen, Meacham said.

A little over 100 years ago, in preparation for America’s entry into World War I, Congress passed and President Woodrow Wilson signed the Espionage Act, which gave the U.S. government sweeping new authority to control and censor the press. Overnight, it became illegal to “convey information with intent to interfere with the operation or success of the armed forces of the United States or to promote the success of its enemies.” Hundreds of communist and pro-German newspapers and magazines were banned or otherwise forced to shut down.

It’s important to put things in perspective. Trump might regularly criticize what he perceives as “fake news,” but at least those outlets—the New York Times, Washington Post, CNN and others—are allowed to continue operating.

Many attendees of the ICI meeting, all representing investment and wealth management firms, weren’t so optimistic about their ability to communicate effectively with shareholders and potential clients. Some of them shared with me their observation that regulators are increasingly getting bolder about what financial firms can and cannot say, and the interpretation of rules keep piling up.

Within the past year, we were asked to add disclosure under a picture of Elvis Presley in many of our gold presentations, if you can believe it. And during the conference, a fund manager said he found it ridiculous that, in a company slideshow, he was asked to add disclosure beneath a picture of Aristotle to inform clients that the ancient Greek philosopher was not, in fact, affiliated with the fund in any way.

It raises the question: What reader would assume that Elvis and Aristotle—the former having been dead 40 years, the latter 2,000 years—are affiliated with an investment firm?

It’s common knowledge in the business that the number of investment advisors and brokers is shrinking day-by-day. You would think that the number of rules and regulations would likewise shrink, but that doesn’t appear to be the case. In such a climate, the only ones who manage to stay ahead are the Vanguards and BlackRocks of the investment world. (Similarly, the number of seats in Congress has not changed in over 100 years, and yet we’ve seen a growth in the power of unelected bureaucrats.)

This has created an unlevel playing field that favors the Vanguards and BlackRocks of the investment world.

I believed that this is one of the key reasons why many people voted for Trump—to cut the red tape and rein in rampant bureaucracy. Here again, he’s kept his word, having so far eliminated, on average, five federal rules for every new rule created, according to the libertarian think tank Competitive Enterprise Institute (CEI).

Case in point: The week before last, he signed legislation that severely weakened the Dodd-Frank Wall Street Reform and Consumer Protection Act. The behemoth 2010 law, intended to prevent another financial crisis, is believed to be directly responsible for the failure of a number of small and regional banks, which small businesses and rural families depend on for loans and other financial services.

That’s why I named Dodd-Frank one of the five costliest financial regulations of the past 20 years. Barney Frank himself, the former chairman of the House Financial Services Committee and one of Dodd-Frank’s chief architects, acknowledged he “sees areas where the law could be eased.”

With the most restrictive parts of Dodd-Frank gone or amended, annual economic growth in the U.S. might finally be able to break above 3 percent, a rate we haven’t seen since 2005.

In the meantime, asset management firm AllianceBernstein shows that, over the past 30 years, the best performing factor has been return on invested capital (ROIC). According to the firm, ROIC outperformed return on equity (ROE) by one and a half times, and gross profitability by nearly three times. Seeing this chart was particularly vindicating for us, as ROIC is among the most important factors we pay attention to when making our investment decisions.

The Dodd-Frank rollback is just the latest move by the Trump administration that should benefit smaller businesses. Quarter-to-date, the small-cap Russell 2000 Index is up more than 6 percent, compared to the S&P 500 Index, which is up 2.8 percent. Meanwhile, small business optimism , as measured by the National Federation of Independent Business (NFIB), remains near a historic high, posting 104.8 in April, up a hair from the previous month. I often say it’s not about which party is in power but rather the policies that matter. Whether the Republicans or the Democrats control Washington isn’t the point. There are ways for investors to make money in either case, and right now, government policy favors domestic small-cap stocks that have limited exposure to overseas markets. The trend is your friend, as they say, and with respect to small-caps, that certainly seems to be the case.

Learn more about small and mid-cap stocks by clicking here!