There are numerous risks working against treasury bonds, corporate bonds, and high yield bonds that pose tremendous challenges to their traditional roles of income and capital preservation as well as their reputation of being safe investments.Bonds have been a good investment for the last 37 years. Unfortunately, it seems highly unlikely that bonds can play their dual role of income and capital preservation in portfolios going forward, making portfolio construction much more difficult for advisors.Treasury bonds, for example, have long been the foundation on which bond allocations are built. But with historically low yields, rising rates, and the massive amount of recent and looming issuance there are risks to Treasuries that haven’t been seen in a long time.

Let’s start with the first of the two primary bond roles: providing income to lenders. Anyone purchasing treasury bonds over the last ten years would have received the lowest yields in a generation. The Fed lowered rates to near zero levels after the Great Financial Crisis of 2008-09. Federal Open Market Committee reduced rates from 5.25% to 0.00%-0.25%, as low as they could go without being negative.Moreover, rates were kept low for quite a long time. Although the GFC recession technically ended in June 2009, the recovery was deemed too fragile to endanger. Rates weren’t increased until December 2015. Rates moved up gradually over the next couple years until paused in late 2018. If anything, the markets are predicting the Fed will once again start cutting rates in the back half of 2019. For investors who rely upon fixed income to pay the bills, these miserly rates are clearly inadequate. 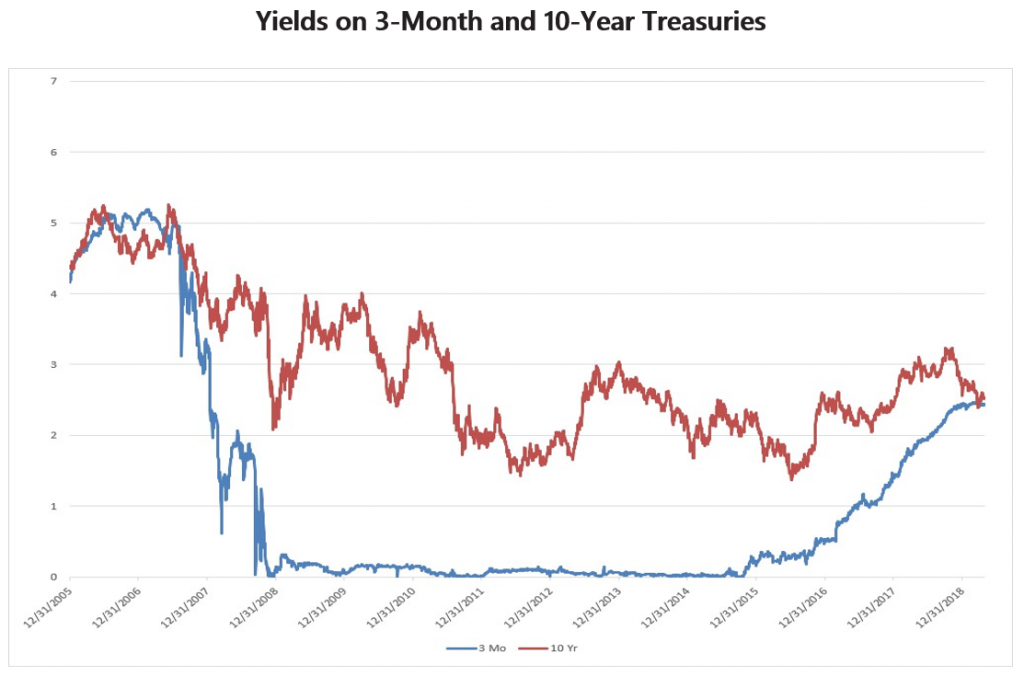 Source: U.S. TreasuryThe situation is even worse overseas. Globallythere is currently $13 trillion in negative yielding debt. In plain English terms, lenders are actually paying borrowers to use their money, which would seem to defy every rational economic convention. Agreeing to receive back less money than was lent out, bond holders would technically be better off keeping cash under the mattress. Although, at $13trn, that would be a lot of mattresses.In this topsy-turvy world, anyone relying upon income from Treasury bonds would be out of luck.

The other primary role of bonds within a portfolio, that of capital preservation, is also under threat. The threat to capital preservation has yet to manifest, but it is a looming, growing problem. Everyone regards Treasury debt as the safest of investments, but what would it take for Treasury bonds to experience losses?The short answer: Bonds could face losses if the laws of supply and demand re-assert themselves and lenders start demanding a yield high enough to compensate them for their risks.The normal price discovery process that occurs when supply and demand intersect has been subverted since the GFC. For literally trillions of dollars of Treasury bond purchases, it simply did not matter what the yield was. Global central banks, insurance companies, commercial banks, passive mutual funds and ETFs, etc., gobbled up mountains of debt without any real concern about the paltry yield they received.But what if that changes? What would happen to the Treasury bond market if lenders started demanding yields commiserate with the risks they were taking? What if central banks around the world stop stockpiling dollar debt? What if the bond market started to choke on the trillions of dollars of debt floating around? What if lenders started fearing the U.S. would not be able to meet its obligations?

The federal government has been running deficits at around $1 trillion dollars are year, and this shortfall has been covered by the issuance of ever-increasing levels of debt. Add this to the three rounds of quantitative easing when the Fed’s balance sheet rose from $800bn prior to the GFC to over $4.3 trillion at its peak. That represents a lot of bills that will need to be paid someday.

Under an adverse scenario the Treasury would have to start offering higher and higher rates in order to attract lenders. As yields and bond prices are inversely related, rising yields could devastate the value of bonds currently held in investor portfolios. Someone who had purchased a bond yielding 2.5% that matures in 2044 would discover that bond would not be worth very much if rates increased to, say, 8%.

It seems highly unlikely that treasury bonds can play the dual role of income and capital preservation going forward. If rates stay low and monetary policy remains loose, the income role is under threat. Bond holders would be stuck with a measly yield barely enough to cover inflation.Alternatively, if rates start increasing, the prices of existing treasury bonds will fall and bonds will be a source of losses, not capital preservation. Neither of these scenarios will provide bonds with the 7.69% rate of return enjoyed over the last three and half decades.

As important as Treasury bond yields are in and of themselves, it is just as important to recognize the ripple effects of low yields. While some investors accepted the paltry yields they received in the distorted Treasury marketplace, many could not. Squeezed out of the Government bond market, they were forced to look elsewhere.The term “ripple effects” understates the problem. Tsunami is a better description of the hundreds of billions or even trillions of dollars sloshing around the globe searching for yield. In our next post we will turn our attention to the credit markets.