Recently, I had the privilege of appearing on “Countdown to the Closing Bell,” Liz Claman’s program on Fox Business. When asked if I was nervous that stocks are heading too high, I said that I’m very bullish. All around the world, exports are up, GDPs are up and the global purchasing manager’s index (PMI) is up.

Oil prices continue to remain low, however, thanks in large part to the ingenuity of Texas fracking companies. As I told Liz, this has served as a multibillion-dollar “peace dividend” that has mostly helped net importing markets, including “Chindia”—China and India combined, where 40 percent of the world’s population lives—Japan and the European Union.

I can’t emphasize enough how impressive it is that Texas shale oil producers continue to ramp up output even with crude remaining in the $50 per barrel range.

This underscores their efficiency and innovation in drawing on oil reserves that were largely out-of-reach as recently as 10 or 12 years ago. What’s more, common law property rights here in the U.S. benefit mining companies in ways that simply can’t be found in Latin America and other parts of the world that operate under civil law.

According to the Energy Information Administration’s (EIA) most recent report on drilling productivity, total U.S. shale oil output is expected to climb above 6 million barrels a day for the first time in September. The biggest contributors are Texas shale oilfields, which will exceed 4 million barrels a day. West Texas’ Permian Basin alone represents nearly 400 percent of these gains, according to research firm Macrostrategy Partnership. 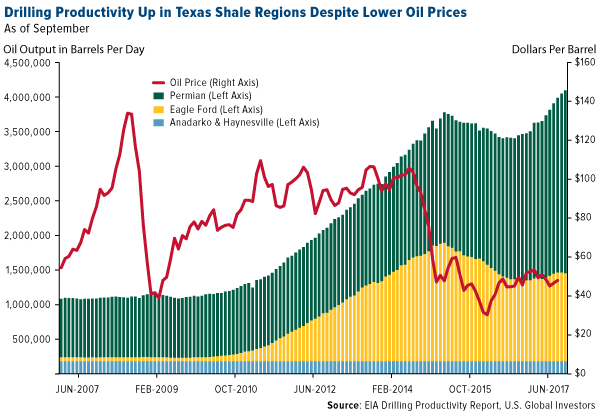 The typical Permian well remains very profitable even with $50-a-barrel oil, according to Bloomberg New Energy Finance. The research group estimates that oil would need to drop below $45 a barrel for some Permian wells to become unprofitable.

Christi Craddick, the Texas Railroad Commissioner, praised the Texas fracking industry in her address at the annual Panhandle Producers and Royalty Owners Association (PPROA) meeting last week. She noted how essential shale oil producers are to the Texas economy, adding that despite the downturn in oil prices, “the Texas oil and gas industry has shown extraordinary resilience.”

“When times were tough, the industry did what it does best—innovate,” she said. “Because of your ingenuity, we’re seeing industry growth today despite the price of oil.”

Again, it’s this ingenuity that’s kept oil prices relatively low, which in turn has helped strengthen GDPs in oil-importing emerging markets and squeeze the revenue of exporters such as Russia, Qatar, Saudi Arabia and others.

Texas-based oil and gas exploration company Anadarko Petroleum was one of the top performing natural resource stocks last week, gaining more than 12 percent. The surge came on the heels of the company’s announcement that it approved a $2.5 billion stock buyback program.

Explore investment opportunities in oil and other natural resources!

Coming Together as a Community


A month after the Texas Gulf Coast was devastated by the unprecedented wind and rains of Hurricane Harvey, the cleanup and rebuilding continues. As I shared with you in an earlier post, the Texas economy is one of the strongest in the world, and its residents are committing to rebuilding Houston and other affected areas better than ever before. As a proud Texan by way of Canada, I can say that it’s in our culture to come to one another’s aid in times of need and help rebuild. 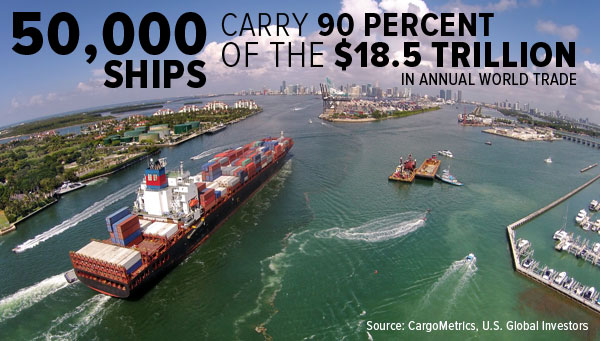 I believe that my bullishness was validated last week with the release of the Organization for Economic Cooperation and Development’s (OECD) quarterly economic outlook. According to the Paris-based group, synchronized global growth is finally within sight, with no major economy in contraction mode for the first time since 2008. World GDP is expected to advance 3.5 percent in 2017—its best year since 2011—and 3.7 percent in 2018.

This news comes only a couple of weeks following the release of the August global manufacturing PMI, which shows that manufacturing activity around the world accelerated to its highest level in over six years. Not only is the index currently above its three-month moving average, but it’s also now held above the key 50 threshold for a year and a half, indicating strong, sustained industry expansion.

As I’ve shown before, the global PMI has been a good indicator of exports and commodity prices three to six months out, so I see this as very positive.

Related: Is this the Start of a Hot New Metals Bull Market?

Where to Invest in the Global Bull Run


World markets seem to agree. Not only are domestic averages closing at record highs on a near-daily basis, but global stocks continue to head higher as well. The MSCI World Index, which tracks equity performance across 23 developed countries, is up 14 percent so far this year as of September 20. And just so we’re clear that emerging countries aren’t being left out, the MSCI Emerging Markets Index has gained close to 30 percent over the same time period.

One of the most attractive regions to invest in right now is Asia, specifically the China region, which has outperformed both the American and European markets year-to-date. The Hang Seng Index has advanced more than 27 percent, driven mostly by financials and tech stocks such as Tencent and AAC Technologies.

A Rebalance of Monetary and Fiscal Policies Needed for Sustainable Growth


But back to the OECD report. The group points out that the good times could easily come to an end if world governments don’t make efforts to balance monetary and fiscal policies, something I’ve been urging for years now.

Central banks are eyeing the stimulus exit door, with the Federal Reserve planning to begin unwinding its $4.5 trillion balance sheet as early as next month. The European Central Bank (ECB) ready to reduce its monthly bond-purchasing program sometime in early 2018, and the Bank of England (BOE) isexpected to raise interest rates in November for the first time since 2007.

As such, governments need to strengthen business investment, global trade and wage growth. The OECD adds that “more ambitious structural reforms” in emerging economies “are needed to ensure that the global economy moves to a stronger and more sustainable growth path.”

Only then can this new period of synchronized global growth be sustained in the long term.