Why the Lyft IPO Blew a Tire

A week into the highly publicized and discussed initial public offering for Lyft Inc., the ride-sharing company, and it’s hard to say it went exactly as planned. After closing at more than $78 per share on the day of the IPO, shares dropped as much as 20% in intraday trading by Friday, April 5. To make matters worse, an estimated 28% of the company’s shares have been lent for short selling as of April 4, according to IHS Markit. 1 That level is on par with Tesla , which, as of Aug. 10, 2018, had a utilization rate exceeding 80% — one of the highest rates of any company in the U.S. large-cap universe. 2

While it’s hard to know exactly why Lyft had such a tumultuous first week, one theory is worth positing: Are investors in the class-A shares waking up to the fact that they have only half of the company’s voting rights, while providing 95% of the company’s total raised capital? 3

This imbalance is something that investors may want to start paying attention to.

For an investor, corporate governance can be viewed as a way of addressing the problems created by the principal-agent relationship, in which the agent (in this case, company management) has the power to make decisions on behalf of, or impacting, the principal (in this case, the investor). Usually, investors demand governance systems to ensure management acts in their best interest, whether through transparency, accountability or incentive structures. For an investor in Lyft, the calculus is a bit different, by nature of the dual-class structure. Dual-class structures often lower investors’ influence relative to their economic exposure. So investors in Lyft, even if the company employs typical governance systems, aren’t just taking agency risk; they’re taking principal risk, too.

To illustrate this (im)balance, we’ve created a framework for measuring the level of investor control by using a baseline of “one share, one vote” (OSOV), where all investors have voting power that is proportional to their capital investment. Control mechanisms vary by regulator, by region and even by company, potentially posing a dynamic set of ownership (or principal) risks to investors. Even where the same control-enhancing mechanism is in place across several companies, the specific mechanics may differ greatly. Stock pyramids 4 may have a greater number of levels, or share classes may have a wider differential in voting rights at certain companies. In some cases, the share class with superior voting rights may be held by only one shareholder group; in other cases, it might be widely traded on the market. Any framework meant to understand potential control risk needs to account for these nuances.

We assess how voting power aligns with economic interest , after accounting for various control mechanisms. The result is a slope that illustrates to investors the amount of control risk taken per unit of investment. Which brings us back to Lyft.

Lyft’s class-A Shares — the shares offered on the public market, as opposed to the class-B shares provided to Lyft’s management — represent just 52% of the total voting rights, even though investors in the A shares provided over 95% of the total raised capital. The outsized control this dual-class share structure gives Lyft’s founders has become increasingly common among technology and software companies. But the scale of misalignment between the capital stake held by the Lyft co-founders and their voting power means Lyft’s co-founders have much more control over the company compared to their ownership level than the founders at other U.S. tech companies employing a dual-class structure. 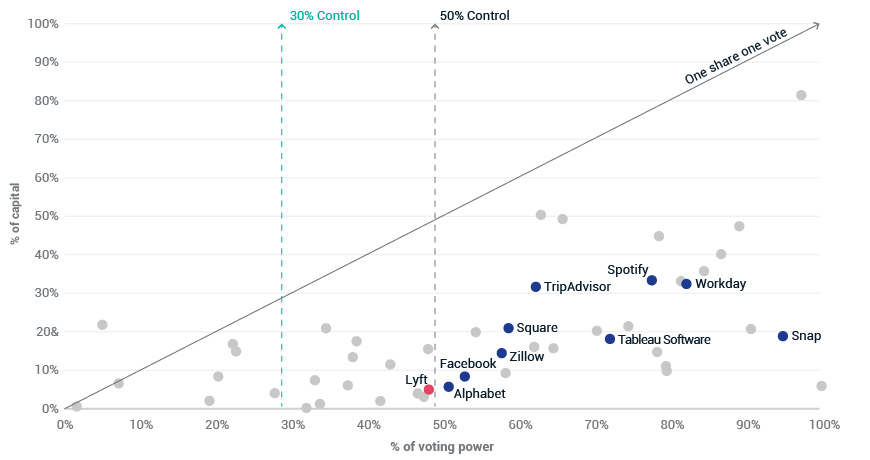 The chart plots the percentages of capital and voting rights held by the largest owner or owner group of Lyft compared to other U.S. companies that employ multiple share classes. Source: MSCI ESG Research, as of March 2019. Fifty constituents of the MSCI USA Index with multiple share classes with unequal voting rights, plus non-constituents Spotify and Snap for recent comparisons. Information on share structure found in Lyft Inc. Amendment No. 2 to Form S-1 Registration Statement.

Investors likely have a lot to think about with Lyft — whether it’s earnings uncertainty, the competitive environment or the pricing of the IPO — and Lyft’s dual share classes pose a potential structural risk for investors, to boot. The company is a relative outlier next to other recent tech peers like Facebook or Snap. As the market marches toward a year with other potentially high-profile IPOs, dual-class ownership structures present a potential risk investors may want to monitor going forward.

1 Grocer, S. “Lyft is Luring Investors, Just not the Kind It Wants.” New York Times, April 9, 2019.2 Defined as the number of shares borrowed divided by the number of shares investors will lend, the utilization rate is a common measurement of the level of short selling in a given company’s shares.3 Information on share structure found in Lyft Inc. Amendment No. 2 to Form S-1 Registration Statement4 In a stock pyramid, control is exercised through a chain of controlled (30%) companies that ultimately results in a shareholder gaining voting power that is disproportionate with his or her economic interests.